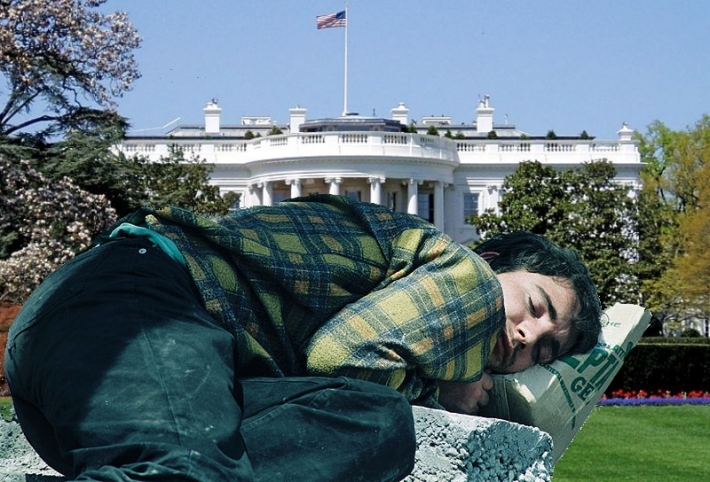 While I may rather slowly starve to death in an alley (call it my egocentric sensibilities), there is an large percentage of the younger adult population moving back into their childhood home with their parents. This morning while I was watching the news… (Okay… I wasn’t “watching” the news… I was asking my girlfriend to please shut it off… Back to the point…) the broadcasters were talking about this trend of adult kids at home. That’s when one of the broadcasters (don’t call them reporters) made a sarcastic joke about it and the rest of them laughed. He made fun of adult kids moving home. There are some major problems with that mentality but most important…

I don’t give two hoots about something said that is intended to be humorous. Someone should be able to make any joke they please. Broadcasters should only be held to the standards of the free market and if the free market doesn’t care then I really don’t.

But what I find so amusing about this situation is the openness to laugh at adult kids at home. They didn’t hesitate for a second. It’s a minority that holds absolutely no power in their minds. It’s like a broadcaster saying, “Women… in the work place… What are they gonna do? Cook lunch?”

That broadcaster would have to be led out of the studio by armed guards for a statement insulting that particular demographic. There is a fundamental difference that needs to be considered though…

That’s exactly what is said about every minority that gets insulted and mistreated. Blacks used to be called lazy. Women used to get called lazy. It’s just a trend throughout history to blame the general poor position of a group on laziness. While it doesn’t mean that a group isn’t lazy, it does mean that we have to think twice before accepting that as a general statement about the group. It’s been used to discriminate in the past.

The first thing that needs to be considered is whether the laziness is causing the poor employment opportunities or if the poor employment opportunities are causing the laziness. It’s definitely not in the evolution biology to fill out thousands of applications and never being able to find work. People are evolutionarily built to move and work. If we’re putting people through an unnatural process then we have to expect some consequences.

The job opportunities for youth are getting bleaker and bleaker. If you’ve ever been on unemployment then you know that after the first month you’re scraping for hope. It can be difficult to stay motivated. Before assuming laziness you have to consider hopelessness. I have a brother that does his own thing all day living at our parents house. He’s busy but when it comes to finding work… he’s hopeless. He sends in applications just to keep our father off his back. He genuinely is accepting that it’s impossible to find work. While that’s not true, his lack of enthusiasm comes from a genuine flow of negative results. Responding to feedback of the environment is essential for survival. He’s just responding…

Many Did What They Were Told

A large percentage of the population of adults kids living at home did exactly what they were supposed to do. They were told to graduate high school. Go to college. Don’t worry about the debt. Focus on their studies. Have a little bit of fun. Then you can come out into the world and we’ll give you a job as a middle class employee. The children held up their end of the bargain doing exactly what they were told…

It’s the older generation that’s failing to live up to the deal. There are fewer and fewer jobs available. People with $30,000 dollars worth of debt are getting paid $10 an hour. They look at the situation and see that they’ve just been sold into slavery for the next X number of years. Debt is ownership. Debt at that level with that wage is as close to slavery as America has. They can either accept the sympathy and ridicule from their parents or stay complete slaves. It’s the difference between a field slave and a house slave. You can either be working in the sun for nothing or accepting the daily punishment and glaring eyes outside of the sun for nothing.

I remember what I was promised. I remember being told that you needed to go to college to succeed. I remember being forced to fill out college applications. I remember being told that we had to go to high school because it “prepared us for college.” (If you don’t intend to go to college… you’re still required to prepare.) Lie after lie was told. Every statistic in the world was sent out to manipulate children into doing exactly what they were told. The ones that didn’t plan on college were constantly considered failures… but… they’re not slaves to education today. While they may be slaves to credit cards or another form of cost (children), the government doesn’t subsidize their credit card debt (too much.) That means that they’re limited from complete slavery by the free market.

The Most Discriminated Against Minority In America

What if I told you this plan…

We lock up blacks for a decade of their life.

They have a bad record, so we try to instill our values over that decade.

The blacks are taught about how we’re helping them.

During the time that the blacks are not literally imprisoned…

They’ll often be imprisoned in other places so their parents can work.

As the blacks turn 18, half of them can be imprisoned if they don’t sign up to fight our wars.

That way the blacks support our system.

it’s a much better prison than before. Sex is common. Alcohol is common. So the blacks want to go. It even includes ONLY a few hours of indoctrination.

Oh yea, and they’re also required to pay for it for the rest of their life.

We do this because we care about the blacks.

The blacks need our support. Without it they’ll all be rolling around in filth completely hopeless.

The blacks that complain about it are just troublemakers and slackers.

Replace blacks with youth and you have a general understanding of the discrimination against youth in our society.

Children are the most discriminated minority in the United States. They’re treated like dirt. Youth are required to participate in a system that’s designed to help the people with money today. Children can’t even vote (not that that would make it better.) Social security requires youths pay for their parents despite the fact that parents have 40 years of working under their belt while youth have barely any. When adults are (should be) worth the most money, they’re stealing the most from children.

It’s an embarrassment to any civilized society.

Adult Kids At Home Are Not The Problem

People may be willing to attack the disenfranchised and blame them for all of the problems of the world but it doesn’t make it ethical. I was very judgmental about people living at home with their parents for a long time but the truth is, we haven’t provided any better options.

The free market occurs whether we ask it to or not. Youth will be doing what’s in their best interest. If society gives them inside slave or outside slave options then they’re going to pick the one that they prefer. It’s not completely their fault. When given two bad options… it really doesn’t make a big difference.

Message To Adult Kids At Home

While this may seem to absolve responsibility for youth, it definitely does not. You will suffer the consequences of whatever decision you make. Living with mom and dad may be financially stable but it’s also encouraging an inability to survive in a real environment. It can be done effectively to improve life with supportive parents (It was done for centuries in the past) but with unsupportive parents, it’s just slowly destroying your ability to be confident and self reliant. That’s not a skill that can come back in a day.

What options are there?

Live on the streets if you have to. Live in a car. Move into the woods and camp for a living. It doesn’t matter what you do. Escaping the trap is the first step. Maybe you’ll fall back in but you need to keep yourself growing strong consistently to ensure that you can escape from it eventually. Please… if you’re being treated like dirt then it’s better to suffer physically than to try to survive it. GET…. AWAY… It’s worth it.

The One And Only Practical Means To Freedom Today

Build A Voluntary Family Not A Biological One