Being Libertarian, Justice Is A Free Market System 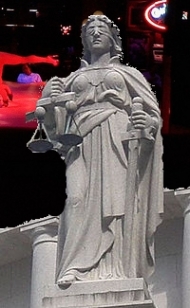 There is a scary misunderstanding of the concept of justice for too many people around the country. Many people think about justice as a form of getting even with the criminals. People believe in fighting for “justice” whenever someone wrongs them. They say, “We need to bring this criminal to justice.” Then they take the criminal. Lock him or her up. Bring them to a judge. The judge decides what happens to them (or the jury.) Then they get locked up or freed.

Justice Is Not Revenge

Justice is not about making someone that wronged you or your beliefs suffer. The American criminal justice system is not providing a system of justice. It’s providing a system of revenge (the American criminal revenge system!) It’s built around the belief that people that do wrong to other people should be punished in some specific government way.

That’s completely obtuse and unrelated to justice. It can best be seen in an example:

A clerk steals a few dollars from the company he works at. The company catches him.

What did the clerk do wrong?

1. Proved to be untrustworthy (not a good employee)

2. Stole value from the business.

What does the company do in response?

1. Fire them because they lost the trust to be employed

2. Get the money back because it was stolen

3. Call the police to lock him up in a cell for x number of days because…

There is no reason justice is served when the things that were done unethically were corrected. A punishment of kidnapping is nowhere near just for theft that’s been completely repaid. Excesses of justice can’t even be defined ethically as revenge. It’s like a person using a gun for self defense against a child with a plush baseball bat. It makes no sense. It gets even more disgusting when you think about drug laws.

What did he do that was unethical?

What does the government do?

Lock him up. Make it so the man has to lie to not face punishment. Lock the man up for a period of time with rapists and sociopaths. Then let him go and leave an aura that keeps him from getting a good job for a decade or two (other than in politics.)

This is the exact opposite of justice.

We Don’t Have To Fight For Justice On That End

The first is making unethical actions a waste of time. When someone does something wrong, justice is them knowing that nothing good will come of that wrong action. This happens to be a system that most people don’t need to worry about excessively. If I know a person that has a history of stealing, I don’t want to hire them to do anything that involves my stuff.

The second aspect is something that people need to worry about. Justice is also about making sure those that do suffer the consequences of their actions aren’t treated excessively poorly. Justice is about ensuring we don’t lock people up for smoking a plant or looking at someone funny. The first part of justice is easy for most people. No one likes someone that’s wronged someone else. This part of justice is difficult for that same reason. We often think, “they did it, they should suffer the consequences” but excessive consequences is just as much a crime to ethics as any other.

We need to fight for the fair treatment of the ones that we think deserve it least. Punishments need to fit the crime. They cannot be increased as a deterrent. Fairness has nothing to do with the number of people doing it (unless, of course, the majority is doing it. Then everyone seems to think it’s fair.)

To a libertarian, justice needs to be treated like anything else. The more we try and control it, the less it works…

What happened when there was no government? Were criminals running around everywhere killing everyone? Did people rob each other every chance they got? Of course not but why not? Because people don’t like it.

Before government took these cases over, “justice” was still served. If someone killed someone unjustly then they’d probably be the next to get killed. People don’t like having to worry about sleeping at night. That means that people are willing to invest a little bit of time and energy into making sure that bad people are dealt with appropriately.

Then again, if you were working for a company that chopped of the hands of employees that stole, even if you don’t steal, you’ll probably start looking for a new job. No one wants to deal with someone that treats humans that make mistakes like they’re dirt. Even people that did commit the most horrific crimes would have a fair shot with people’s natural tendencies. A genuine apology and a living a life of doing good can make up for just about any crime.

Government justice is just a form of violence. Just as violence that the criminals use is wrong, excess violence against violent criminals and victimless criminals is wrong. There is no justification for the violence and coercion used by the American criminal justice system.

For a libertarian, justice needs to be thought of as a fairness for the victims and the criminals, or better yet, for everyone whether they agree with what we believe or not.

One thought on “Being Libertarian, Justice Is A Free Market System”