Get Rid Of Your Political Goals

As Libertarians, it can be hard to look into the future of American politics enthusiastically. Libertarianism has been around for 40ish years but virtually no progress has been made. In fact, the exact opposite has been happening. Just about every constitutional right now has an earmark and the government is just gaining more and more ground on them. This can lead to Libertarians developing a number of political goals. The problem is that political goals are the exact opposite of what you’re after.

Politics is the use of government force to get something done. No matter how you break it down, eventually, the only force that government can use to get it’s goals achieved is force through kidnapping or guns. Democrats and Republicans (Republicrats and Democans) can have political goals. They are willing to use this violence. Libertarians, however, should aim to be above this.

The point that most libertarians will be saying after this is, “Yea but… I’m advocating less aggression.”

Advocating for less aggression through politics is like advocating for less Nascar racing by buying an ad on a Nascar car. You can have the car say, “Nascar is boring. Get out and do something!” (sorry I’m biased.) Sure, you may be reaching the audience you want to but they really don’t care. You’re just going to end up supporting the system. You’ll be using politics to try and stop politics. That’s absolutely absurd.

Political goals and politics are the last thing that we need more of.

Liberty Instead Of Politics 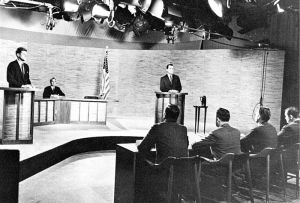 Politics don’t always win. All the political banter in Washington doesn’t mean a thing. Politics mean only as much as the people of the United States listen to them.

An obvious example of this is the speed limit laws. Speed limits may be 60 mph on the highway but you’d be hard pressed to find a person that doesn’t break 70 mph on occasion (if not every time.) That means that politics didn’t do a thing to stop the behavior.

Another example of this could be prohibition and the war on drugs. The government puts billions of dollars into stopping something and still can’t even reduce the levels of it. It’s a joke. Politics are laughably weak at changing people’s behavior. As libertarians, we should probably be happy about that. There are better alternatives than political goals.

Political goals are one of the least effective ways to get people to do things when it’s something they can’t kill you for. The only way government really has any power is when they’re “at war” and killing without consequence.

There are millions of alternatives to politics. To make a quick list:

When you settle for political goals you’re working through the lowest possible method. Politics is not a all-purpose tool. Just about (and probably) every goal can be achieved without pointing guns at people’s head. It can sometimes be a challenge to find the right tool but that’s what’s needed in a peaceful society.

Instead of setting political goals and hoping that all the stars align, set life goals that put you in a position to actually make a difference. Hell, I’d recommend reading a business book instead of voting. It will give you more power in the long run. (I’d recommend just about everything over voting.) You can be one in a billion and hope to affect a couple other people or…

you can develop a truly creative solution that touches millions of people’s lives.

No. I can’t give you the prescription. That’s the hard part. That’s also what makes it worth doing.

Jail and School »
« ObamaCare In Action! Must Read. (Click Image to zoom)

2 thoughts on “Get Rid Of Your Political Goals”